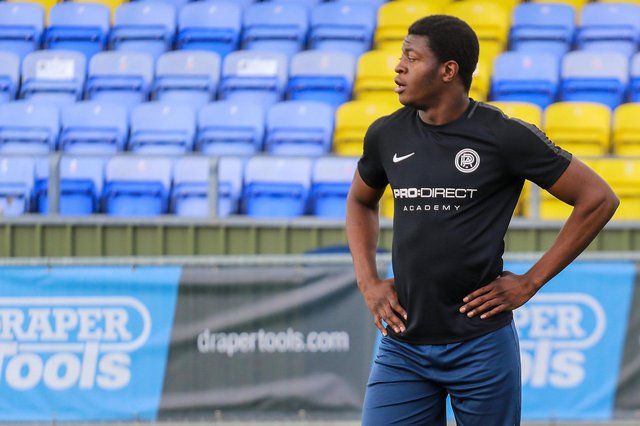 Ngimbi was playing Sunday League youth football for Widbrook United when he joined up with the academy after being alerted of the programme by his manager.

The former Park Community School pupil remains in the process of finalising his place at UCFB (University Campus of Football Business) Wembley.

Ngimbi feels the programme he joined after leaving school - then the Pro:Direct Hampshire Academy - has provided him with a great balance to better himself both on and off the pitch.

His hard work within the set up - now known as the Havant & Waterlooville Pro:Direct Academy and solely based out of Westleigh Park - from an educational aspect has seen him secure his university place.

Ngimbi is hoping to work within the football industry in the future but he says you don't necessarily have to be the most skilful or high quality player to enjoy a success story through the academy.

He said: ‘This has opened my eyes to see I can have a balance between the two. I can work on my education and play football at the same time.

‘It’s good here because I’ve been here for two years and in that time I’ve improved a lot as a player, so that taken on can find me a new club where I can progress and be a good level at.

'They give everyone a chance to play a good level of football. It’s important for people to know they can still come here if they’re not the best of players, they can work on their skills, get better and also get a good education too.

‘That’s why I like this place, because you can play a high level of football and get your education in.'

Ngimbi was playing Sunday League youth football for Widbrook United when he joined up with the academy after being alerted of the programme by his manager.

Now, through the Pro:Direct Academy Hampshire initially - prior to the Hawks link up that was officially announced earlier this week - he has experienced playing in the Tactic League, had the chance of featuring in the FA Youth Cup and had got to work under former Pompey youth product Joe Oastler, who is head of coaching for the academy set up.

Ngimbi has been thankful for the opportunities provided to him through the programme and the help of head of education, Craig Stares, as he now prepares to move to London to continue his studies.

Ngimbi said: ‘The good thing about this place is you can come here not being the best footballer, work here and improve, while also getting that good education in.

'You get better as a player too and you’re learning, so that’s really good.